You are here: Home / Remote Work / Why I love Airtable 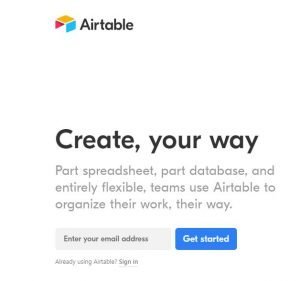 I loved Airtable from the moment I saw it.
Clever software with a fantastic user interface, it is part spreadsheet, part database and all collaboration

It lives in the cloud (obviously) and is a beautifully elegant piece of software.
There are still bits about it that frustrate me, but usually they are on their roadmap.
The team are very responsive and react positively.

I was initially motivated to write this post after watching a video at https://angel.co/airtable by one of the co-founders, Andrew Ofstad

His interest is in sophisticated software with a simple user interface.

He says that a lot of modern software has simple functionality and simple user interface, for example, a push for pizza app – you push a button and then get a pizza.
Other software has sophisticated functionality but very complex UI, for instance, Photoshop – extremely powerful software but it takes you a long time to learn the interface to get the full benefit of the power of the software.

Before co-founding Airtable, Andrew had worked on Google Maps.
The video shows a fascinating story of how Google Maps progressed – we all get used to just how good Google Maps is now, and forget the iterations take him to get to today’s version.

One of Airtable’s design philosophies is based on a Google Map’s one, where they give themselves constraints limits and use just a few pieces of user interface.
With Google Maps this was very hard to do well – but we have all benefited from the work that has gone into it.

The Airtable team have excelled (pun intended) with this.
At Google Maps they thought “what if the map was the actual user interface”, they wanted people to interact with the map directly so the rule sort of became:

The result is an easy, and spreadsheet-like way to build a powerful database.

In 2016 Airtable got $52 million in funding; Business Insider Australia said: “This Silicon Valley sleeper hit app just got $52 million to do for spreadsheets what Microsoft did for computers.”
They added: “The secret to Airtable’s success, according to its CEO, Howie Liu, is that it makes it easy to make a custom app. Every cell of an Airtable spreadsheet can store anything, including photos and lists. Adding an interface on top can turn it into a simple but powerful app – without coding.”

I use Airtable for a huge variety of tasks:

It also has a great many templates that anyone can use, the Airtable Universe to showcase great examples.

They state on their website that it “has built-in support for many popular apps, a robust API, and can be configured to work with over 450 websites and apps via Zapier.”

A very elegant piece of software run by clever people.

As heard on Blackstar Radio